S7 Technics: the situation in MRO industry and future plans

About hangars load, cargo transportation and plans for the near future 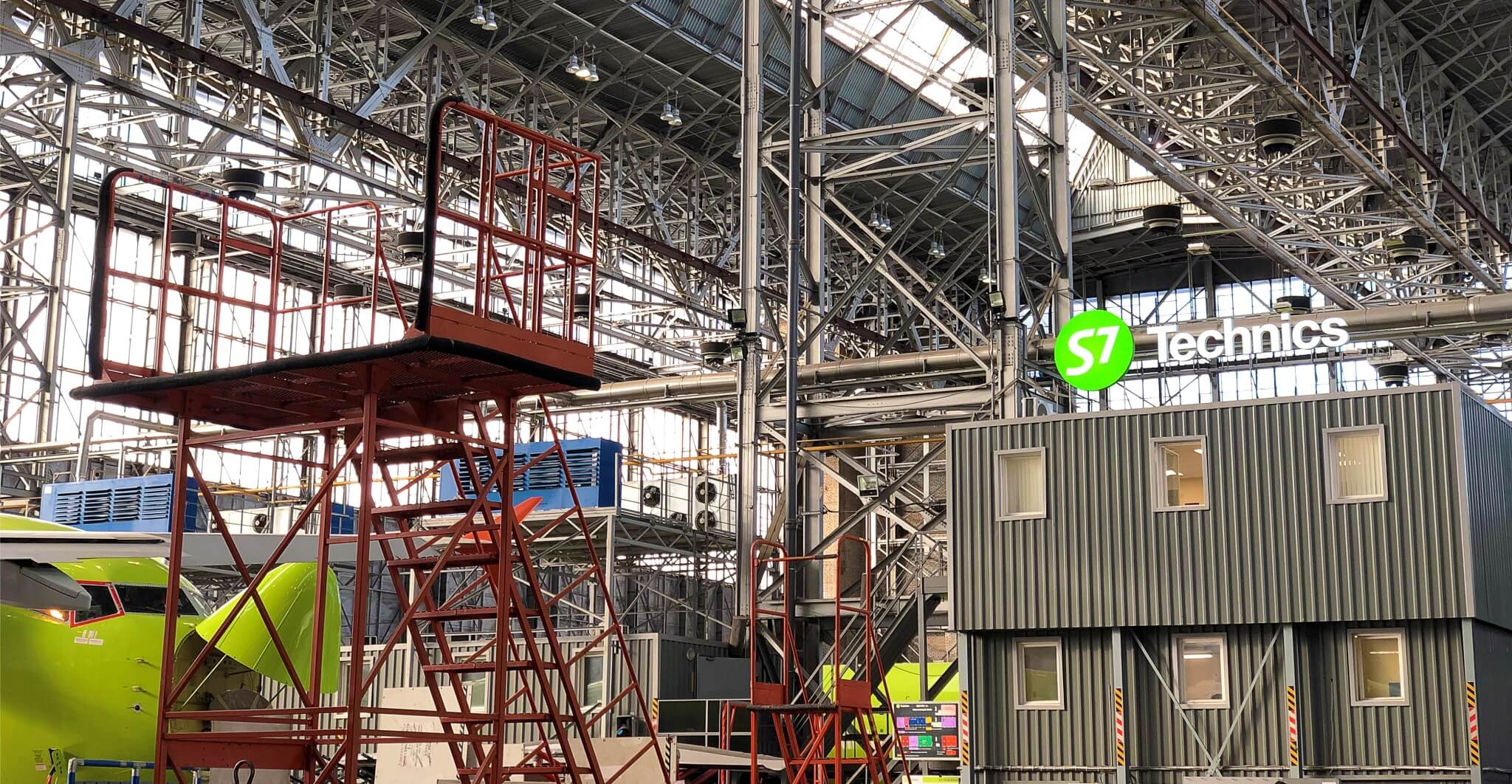 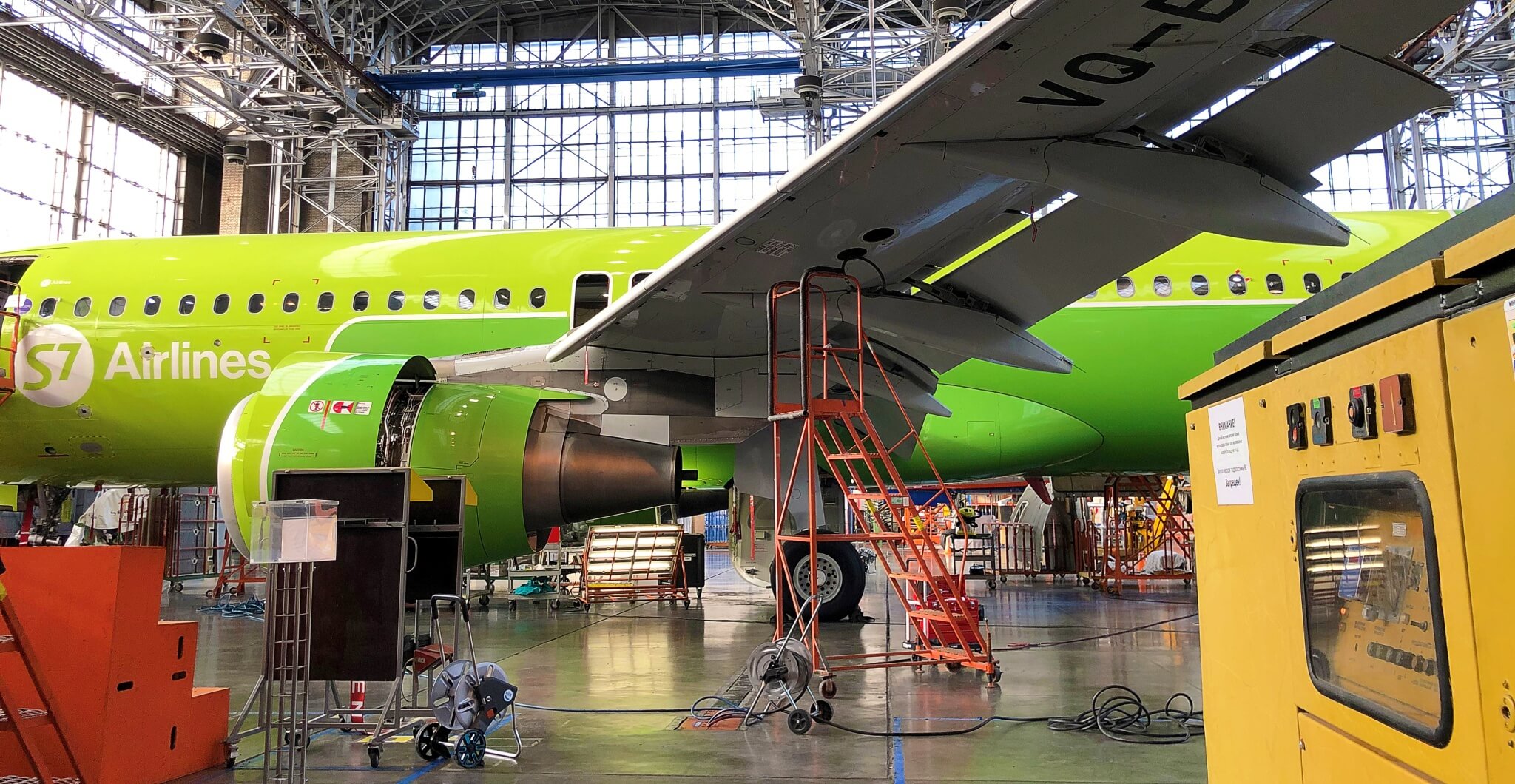 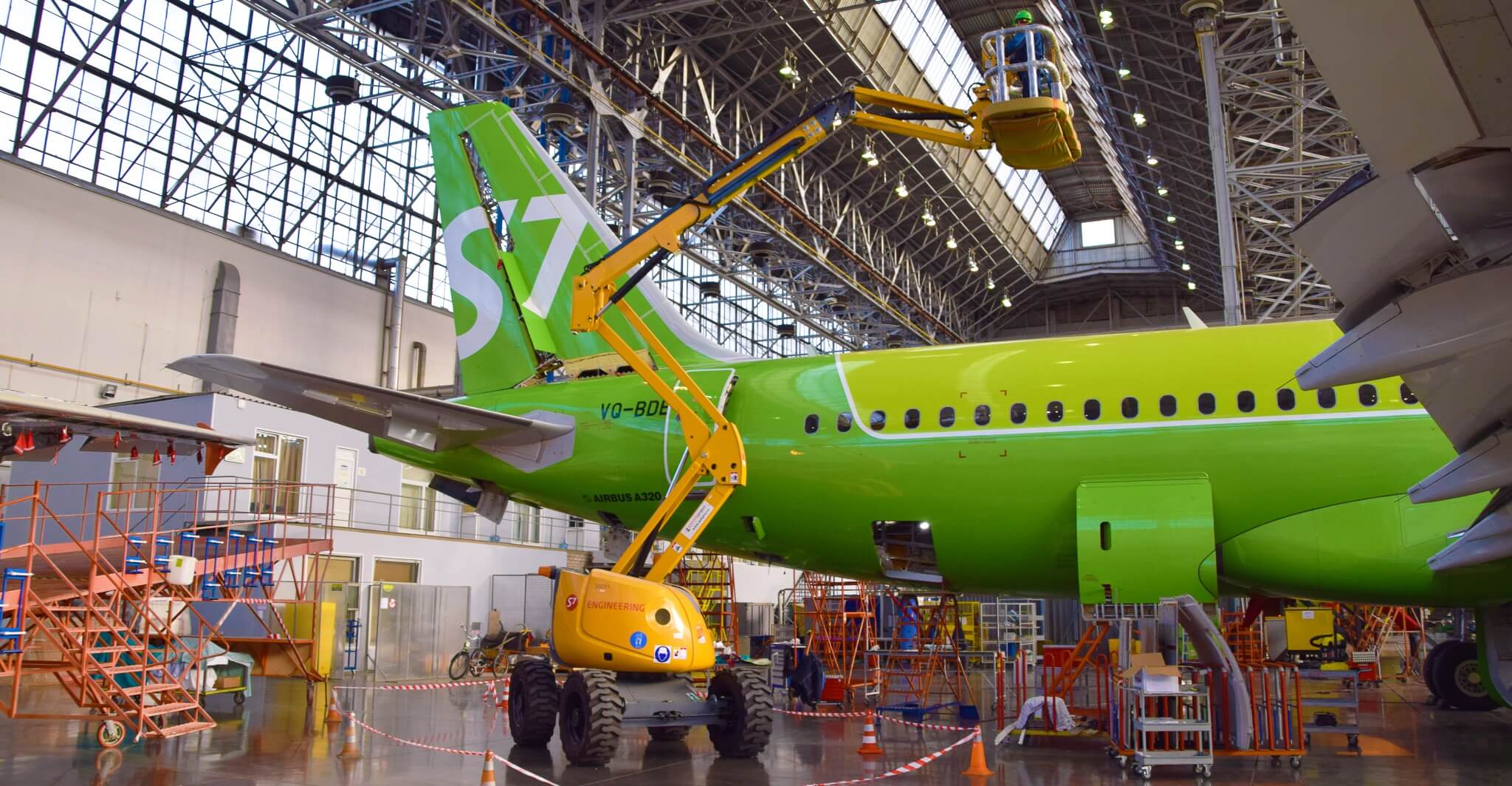 The situation with the COVID-19 pandemic, which has been observed by the whole world since the beginning of 2020, has a significant impact on the Russian aviation industry, including in terms of maintenance and repair of aircraft.

According to the State Corporation for Air Traffic Management of the Russian Federation, for the period January-September 2020, the number of flights performed by Russian and foreign airlines in Russia amounted to 981.7 thousand. This is 29.3% less than in the same period last year.

At the end of March, Russia completely closed regular and charter flights with other countries. Airlines were forced to reduce the number of flights and, as a result, sent 20 to 50% of their fleet to storage.

STORAGE PROGRAM
For aircraft that are temporarily taken out of flights, aircraft manufacturers have provided certain preparation procedures as part of the storage program.
All maintenance work on each type of aircraft is performed in accordance with the manufacturer’s recommendations and instructions. The list of works also depends on the storage period: short-term (up to one month) and long-term (over three months). But in any case, putting the aircraft into storage is not a quick process and can take from three to five days.
This is a whole range of work, which includes closing the covers of the air intakes and nozzles of engines, air pressure receivers, and chassis. A complex of lubricating works is carried out to prevent the appearance of corrosion. The windows of the cockpit, cabin are closed from the inside.

When removing the aircraft from storage, reverse procedures are performed. In addition, the operation of avionics is checked, compressed air is blown through the air pressure receivers, mechanization and cable wiring are lubricated.
This year, the specialists of S7 Technics have carried out work on the commissioning and decommissioning of about 50 aircraft.

THE SITUATION IN HANGARS
In MRO industry, the summer period is considered a low season, due to the fact that it is the time of holidays and airline aircraft are loaded with the implementation of an intensive flight program.

However, this summer the situation was opposite: S7 Technics’ hangars was much more loaded than in the same period in 2019, due to planned base maintenance checks of aircraft that were removed from the schedule and unscheduled redelivery checks for the aircraft return to the lessors.

For comparison, in January – September 2019, 51 C-checks were performed, and in the same period in 2020, 71 heavy checks of base maintenance were already performed, which is 39% higher than last year.

“As for the line maintenance A-Checks, this year in nine months they were performed by 22% less than in 2019. This is precisely due to the reduction in the number of flights during the pandemic and, accordingly, the increase in service intervals, ” said Nikita Belykh, Sales Director of S7 Technics.

In the spring-summer season, there was also a decrease in the volume of work of specialized areas for the repair and maintenance of aircraft components (restoration of passenger seat covers, repair of oxygen and emergency equipment, production of plastic components of passenger seats, etc.).

Most of the load was associated with the execution of return checks in the interests of leasing companies. For nine months of this year, about ten returnable forms of maintenance were performed. Part of the fleet had to be stopped by the airlines, and it was not possible to transfer the aircraft from one airline to another. As a result, after the return chekcs, leasing companies transferred part of the aircraft to storage.

ENGINES MAINTENANCE AND REPAIR
The pandemic has had a significant impact on MRO providers performing engine repairs. Major European engine repair plants are experiencing a period of sharp reduction in the workload for major repairs. In the current situation, S7 Technics managed to maintain stability in its work, including due to the emergence of demand for services for the return of engines from leasing and restoration repairs.

In the spring and summer periods, there was a decrease in requests for engine repairs. However, at the end of the summer and in the autumn, S7 Technics specialists noted a sharp increase in demand for restoration repairs of power plants. This is mainly due to the increase in air cargo and domestic flights. Due to the restoration of engine repairs, air carriers can significantly reduce the cost of engine maintenance in a difficult period for the industry.

The demand for work on aircraft during the summer period was higher than ever. The autumn period shows that the pandemic has made its own adjustments to the usual rhythm of the MRO industry and it is now difficult to predict the level of demand for certain aircraft maintenance services in the coming months.

Based on the emerging moderately positive trend in the passenger air transportation market, S7 Technics plans to pay more attention to its other services in addition to basic and linear maintenance.
“Our production schedule is formed at least for the next six months. In addition to the periodic and operational maintenance of aircraft, we plan to focus on integrated solutions for redelivery checks, engineering services, component production, engine maintenance,” commented Nikita Belykh, Sales Director of S7 Technics.

The company believes that at the moment, the best model of behavior in the aircraft maintenance sector is to follow the strategic goals already set, at the same time, with adjustments and timely response to the current market situation.

Therefore, plans for the opening of the S7 Technics workshop for the maintenance of auxiliary power units (APU) at Moscow’s Sheremetyevo Airport are not postponed. It is also planned to open a workshop for major repairs of CFM56-5B/-7B engines. This will allow S7 Technics, in addition to expanding the list of services offered for component maintenance, to take a more comprehensive approach to working with airlines and offer them an expanded package of aircraft maintenance services.

SHIFTING THE FOCUS
During the pandemic, the largest passenger airlines managed to convert part of their business to the transportation of boxed cargo in the passenger cabins of aircraft. In March, most Russian airlines using the long-haul fleet thought about this.
Due to the high demand for cargo transportation, many operators managed to reduce the negative effect on financial results caused by the decline in passenger flights.

But the most successful spring period and the beginning of summer developed for specialized cargo airlines, due to a sharp increase in demand for the transportation of medical supplies and personal protective equipment.

In the autumn-winter period, when there is a seasonal decline in passenger traffic, some airlines plan to resume the transportation of boxed cargo to maintain a high level of operational load of the fleet.

But cargo transportation in aicraft passenger cabin has certain restrictions: in terms of dimensions, characteristics, weight and category of cargo. In addition, loading cargo into the cabin can take six to eight hours.

S7 Airlines saw the trend on the lack of available capacity in the passenger fleet even before the pandemic began to develop the direction of air cargo, specialized cargo aircraft and in August signed a contract with the U.S. leasing company GECAS for the supply of two cargo Boeing 737-800BCF. It will be the first fully focused for the carriage of cargo aircraft in the company’s fleet. The lessor plans to deliver the first 737-800BCF by the end of 2020. The second aircraft is scheduled for delivery in January 2021. Aircraft with a payload capacity of 23.9 tons have a range of up to 3,750 km.

The cargo fleet will have to meet the relevant market needs and expand the list of categories of cargo transported. A fairly wide route network of S7 Airlines will allow you to form an interesting offer for the market. And it will also be possible to ensure optimal loading, including with the help of transfer flows, when the capacities of cargo and passenger aircraft are combined. According to the airline’s forecasts, the new aircraft will increase the volume of cargo and mail transportation by 30%.

Such measures will further strengthen the financial stability of the airline, taking into account the current situation in the industry. 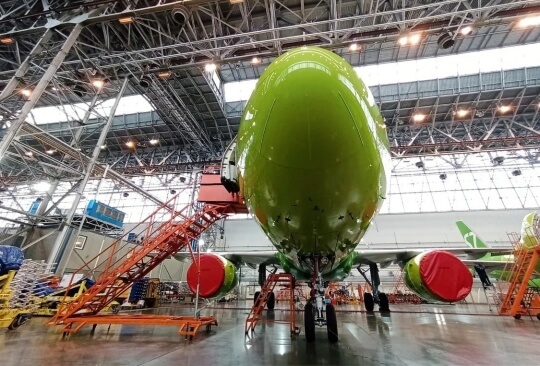 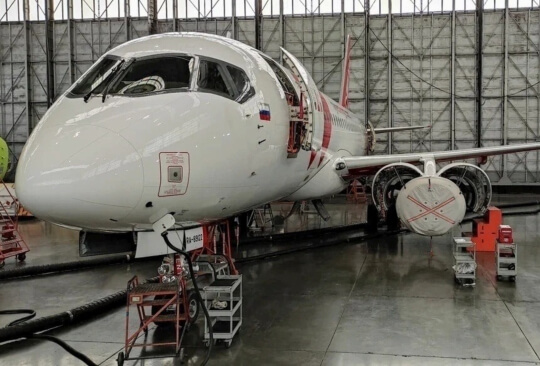 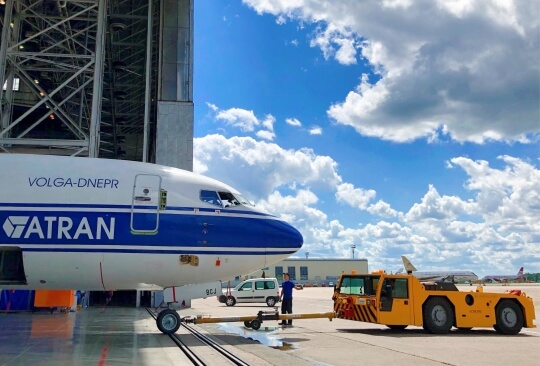 Until 2012, the aircraft flew as part of one of the passenger airlines’ fleet, and then it was converted into a cargo aircraft and transferred to ATRAN airlines